Musqueam Language strives to build awareness of our culture and history throughout our territory, promote fluency of our hən̓q̓əmin̓əm̓ language, and encourage our people to live xʷməθkʷəy̓əm culture every day.

In accordance with the strategic objectives set out by Musqueam Council, we:

This is a guide that instructs readers how to write and pronounce hən̓q̓əmin̓əm̓ sounds.

Upper-case letters are not used in the orthographic system.

hən̓q̓əmin̓əm̓ has 36 consonants, 22 of which are not found in English! Some, like t̕ᶿ, are very special sounds as they appear in only a handful of languages around the world.

Since the majority of hən̓q̓əmin̓əm̓ sounds are different from those of English, the English alphabet (orthography) is not an adequate nor a straightforward system for writing hən̓q̓əmin̓əm̓ words.  Instead, Musqueam uses the North American Phonetic Alphabet (NAPA), where each sound is represented by a single distinct symbol.  This is a significant advantage for learning how to read, as the hən̓q̓əmin̓əm̓ alphabet creates consistency of interpretation and predictability of pronunciation.

Though they may appear foreign at first, symbols like “ə” (called ‘schwa’) are found in the pronunciation guides of most English dictionaries.  Other symbols are used in the alphabets of many Native languages of North America, as well as in several languages from countries around the world.

When vowels are followed by a colon “:”, this means the vowel is lengthened.

What does that little comma above or next to a letter mean?
Some hən̓q̓əmin̓əm̓ consonants, such as c̓, k̓, ƛ̓, p̓, q̓, or t̕, are categorized as glottalized or ejective stops. They are distinguished from their non-glottalized counterparts by an audible popping sound upon their release.

l, m, n, w, and y represent the group of consonants known as resonants, characterized as such because of the reverberating or “resonant” quality of their sound. Their glottalized counterparts l̕, m̓, n̓, w̓, and y̓, like the glottalized stops, are also represented with an apostrophe, but are distinguished from the stops by the creaky quality of their sound which is achieved by constricting the vocal cords during the articulation of a particular resonant.

An interactive tool to hear audio of our hən̓q̓əmin̓əm̓ language from Musqueam Elders, view historical photographs and see where they are located, read and hear audio of the children’s place names book and follow the route of the story on the map.
Learn more 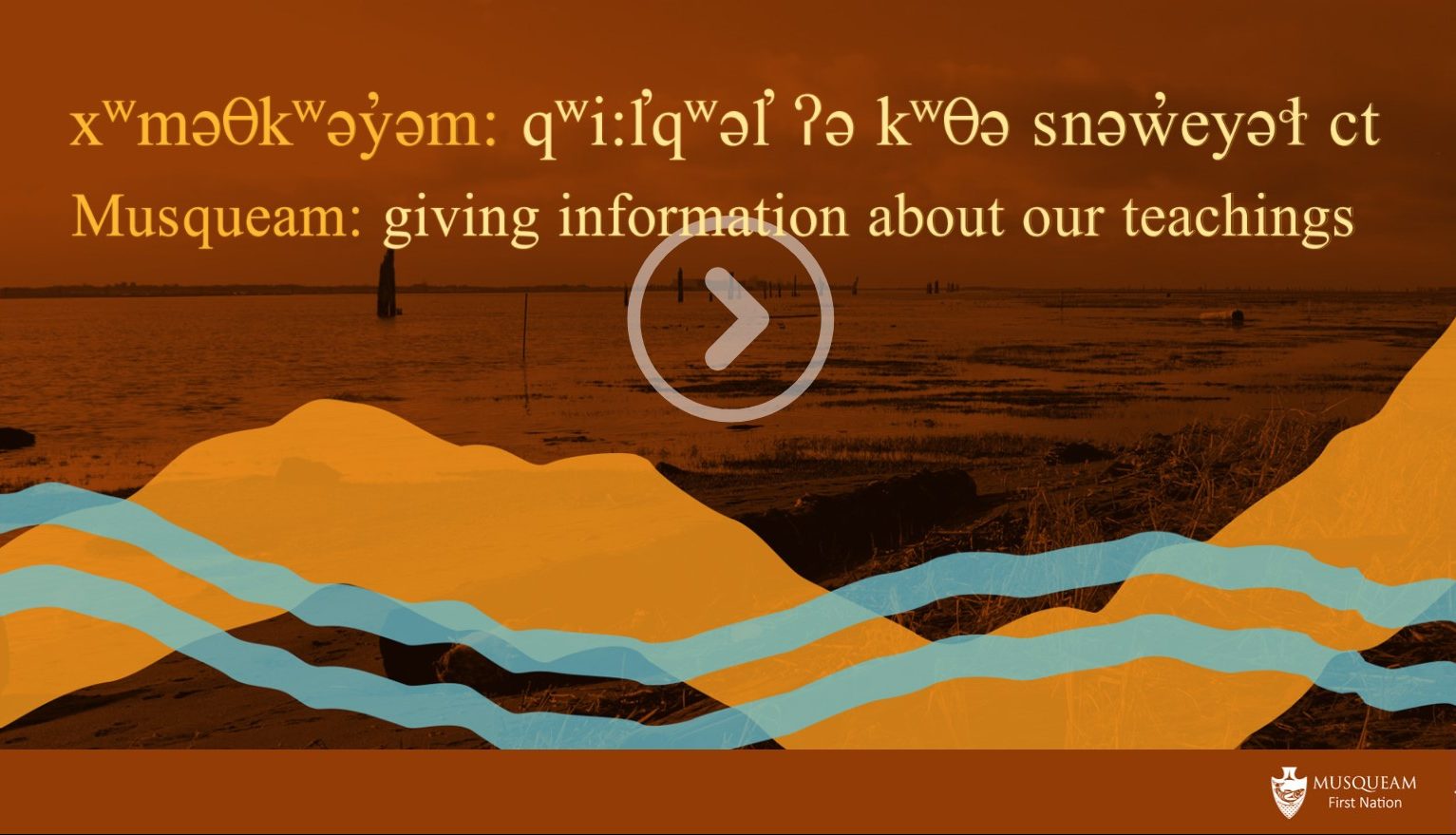 Musqueam provides a number of resources for educators and students. To learn more about hən̓q̓əmin̓əm̓, check out the Musqueam Teaching Kit, an interactive resource that was co-created with UBC’s Musqueam of Anthropology.
Learn more